Somerset Visually Impaired Cricket Club compete in the BCEW National League. The club plays each other county once and competes against eight counties. The visually impaired cricket club play their home games at Wombats CC in Bishops Lydeard. Matches are played with a larger ball (size of a handball) that makes a sound and the wickets are larger. Each player much be registered blind or partially sighted. Each player is then placed into one of four sight categories. The team is then made up of different sight categories, with no more than two players from the high partial category. 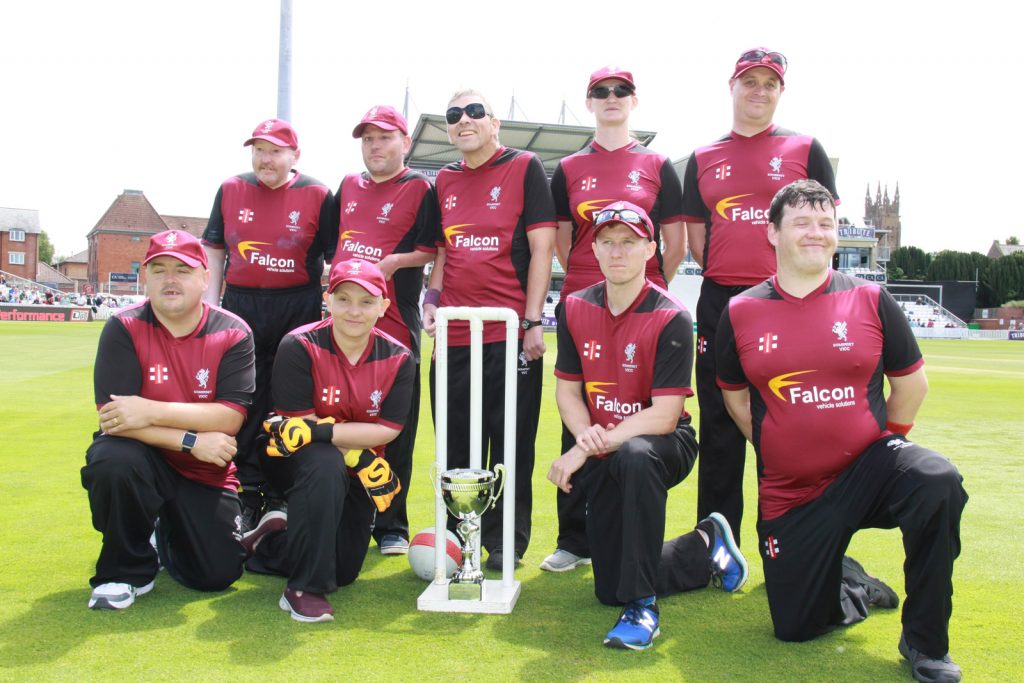 Somerset Visually Impaired Cricket Club are a friendly and sociable club who are always looking for new players.. The club have an open training session during the spring, where new players are welcome to come along and try the game.

The Somerset Visually Impaired Cricket Club was officially formed in 2011, after a successful trial through 2010 ensured that there were enough players interested to create the team. Despite being a very young club the team have gone on to achieve a number of successes in the past 8 seasons.

Eligibility: Playing for the team

All players must be registered as blind or partially sighted and, as the playing rules vary according to the sight classification of each individual player, players must be further classified under BCEW’s Sight Classification Procedures set out as Part A of its Regulations. Each player must be placed in one of four sight categories which must be declared on the club’s team sheet and designated on the field by the wearing of an appropriately coloured wristband, Purple or black for totals, yellow for low partials, green for mid partials and red for high partials.

Somerset were eagerly looking forward to the first back to normal season after the disruption of the past two years and the minibus to Sussex was a mixture of positive anticipation and a little trepidation as we only had nine players for the first league fixture. We like a challenge and Captain Heidi Linegar did a heroic job of keeping her team’s spirits up no matter what happened! Sussex declared on 265/3 and sadly Somerset could only struggle to 57 all out but we are eternal optimists and knew it was early days. Plus pleased to come away with two bowling bonus points largely thanks to a 2-20 from Martin Hallett.

Onwards to the next away trip, off to London Metro in the 30 over a side cup quarter final. Sadly another tricky day at the office for the away side being put it and only managing 99 all out, with almost half of the runs coming from the notable knock of Rob Crisp of 46. Metro rattled the runs off in under 10 overs; things were starting to look worrying.

But what a difference a week can make! Still on the road and next up was a league double-header at Northamptonshire Steelbacks. The beleaguered battling continued as things started badly, then got worse, then got disastrous as Northants had the visitors at 24/9. Cometh the hour, cometh the legend that is “Mighty” Mikey Contreras, with what felt like a massive 38, and David “The Redoubtable Roadblock” Ridgway who held fast and managed to creep the score up to 94 all out. Then came the second miracle of the day when everything a Somerset player touched in the field turned to gold and the home side were whittled out for 89 to seal a wondrous win with Captain Ed Hossell (3-8) and brilliant B1 Adrian Snellgrove (3-23) snaffling a trio each. 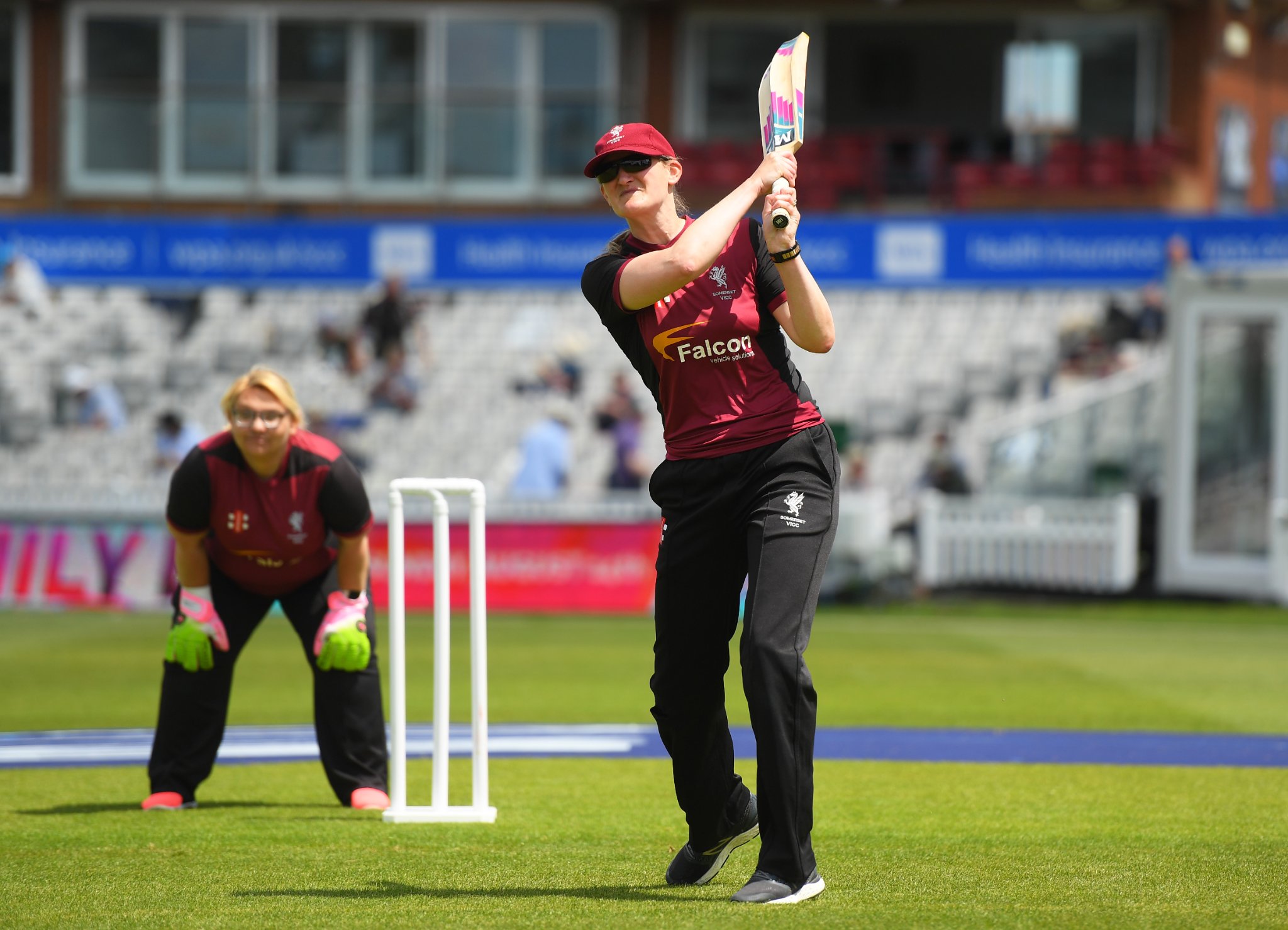 On Sunday Somerset remembered how to bat and piled on 230 all out with a supremo century from the skipper, finally being run out for 181 whilst trying to squeeze every last run out of the innings, leaving Northants 25 overs to fight back with. Another fabulous fielding display ensued but Somerset were just unable to take the last wicket as, with an echo to the earlier match, Gerald Porter was irremovable and ended on 98 not out. A further repeat from Saturday was a brace of three-wicket hauls from Ed and a B1, this time Alan Mabey joining the party. Northants had nearly pulled it off and reached 216 in their allocated 25 overs and a draw was the end result. What a weekend for the neutrals and a fabulous advertisement for the game!

Next up, T20 Cup quarter-final action away in Surrey where the recent good form continued. The home team were put in to bat and reached 135 off 18 overs. The honours were shared around the bowlers this time together with a couple of sharp run-outs. Losing only two wickets, the visitors quickly piled on the runs and took the game easily with 5 overs to spare; the captain joining his opener brother Rory Hossell in a half-century each (68* for Rory, 53* for Ed). The season had been turned on its head and confidence at a high.

Heading into August and yet another away game, back to the capital, this time in the league. Metro batted first and thrashed 293/2 off just 25 overs before declaring. But there would be no de ja vue this time around as Ed “Headline-Hog” Hossell helped himself to another century (134*). He was ably assisted by a nifty 91* (both scores off 82 balls coincidentally!) by injured during the game “Robust” Rob Crisp with a cameo from Kathryn Jelfs-White coming out to run for him and being run ragged by Ed to snaffle success with a massive five overs left of the potential 35-over innings. 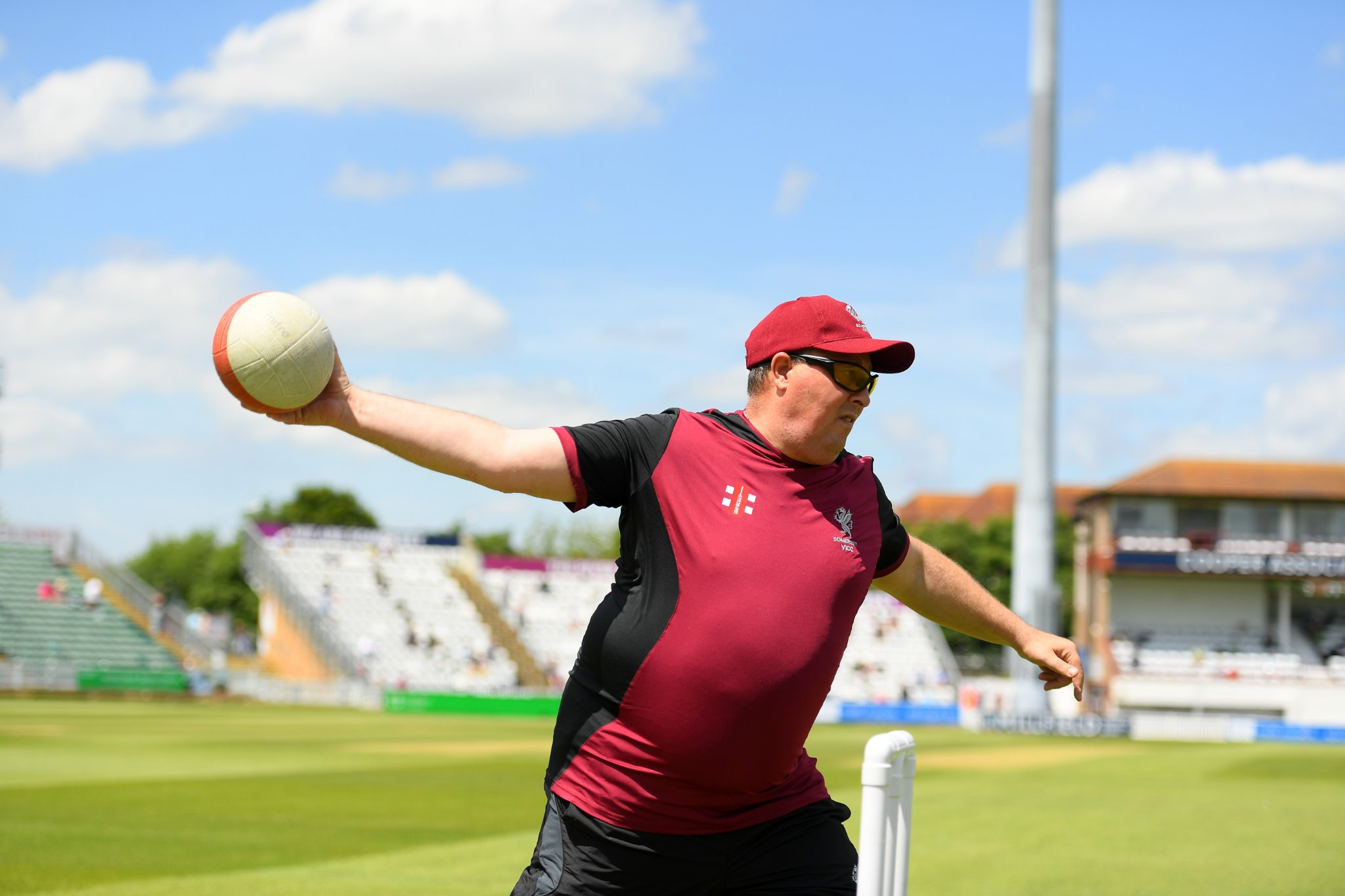 Unfortunately our last two games had to be abandoned as draws due to travel constraints for the away sides, London Metro and Sussex Sharks, leaving Somerset finishing second in the league again, 17 points behind victors Sussex, who knows what may have been if the form had continued at home and the trains had been running.

As usual a group of new and developing players plus a few old hands went to the annual Development Festival in Leicester. Much merriment was to be had and Somerset managed two wins from six eight-over a side games, both coming down to the last ball. The weekend is about experience and progression rather than results but they secured a couple of gongs; Dave Ellis taking Low Partial player of the tournament and the team taking the Spirit of Cricket award.

However, the year ended on a high once again heading to T20 Finals Day at Wolverhampton CC. Somerset were heading into the finale of the year looking for an upgrade on last year’s runners up spot.

Mikey with the T20 Trophy

The semi-final saw Somerset versus league champs Sussex who were put in to bat. Goodness knows what was in the half way drinks but Somerset took command, Rory starting off with a wicket maiden and keeping Sussex to 32 in the second ten, finishing 99 all out. The final over saw two wickets and a run-out by Ed (finished on 3-11) after a marvellous 2-10 from returning from long-term absence B1 Steve Cook. The chase wasn’t straight-forward and Somerset won by seven wickets with only nine balls to spare, Rob hitting 59*.

On to the final against last year’s foes, Northants who were asked to set the total. Rory took two quick wickets and the West country warriors dated to dream. More sharp bowling and fabulous fielding, including a ridiculously athletic running catch from Alan, had the champions at 40/5. Northants kept it interesting for the crowd and put on a great middle order partnership before Matt Davidson took a high catch to finally break it at 86. A couple of rapid run-outs in the final over left a total of 136 to hunt down.

The second innings began with a four and Somerset headed in to drinks on 100 with only one wicket down before Northants really tightened up to only let slip 18 runs off five overs. Nerves began to jangle on the team bench but Jason Aughton and fearless leader Ed went into overdrive to smash the required runs off the sixteenth over to secure a nine wicket win. The captain took hold of the trophy for the third time in Somerset’s history plus the Partially Sighted Player of the Day award too.

Unusually absent in the Blind Cricket England & Wales end of year awards this season, Somerset did bag a good haul of nominations across various categories showing how much of a group effort the year had been.

Our thanks as always to the Somerset Foundation and Wombats CC plus our hoard of valuable volunteers; we couldn’t achieve what we do without your support. Roll on 2023!

Growth in the game

With the increasing growth in participation of cricket amongst disabled people, there is an ever growing need for supporting resources for coaches and volunteers in order to coach cricket.

This video is aimed at coaches who are already active, however may be new to working with Visually Impaired cricketers. We hope that the resources prove useful in your work within disabled cricket and provide you with the necessary support to deliver fun and effective cricket coaching!

Training takes place between February – April on a Saturday afternoon at the Copper Associates County Ground.