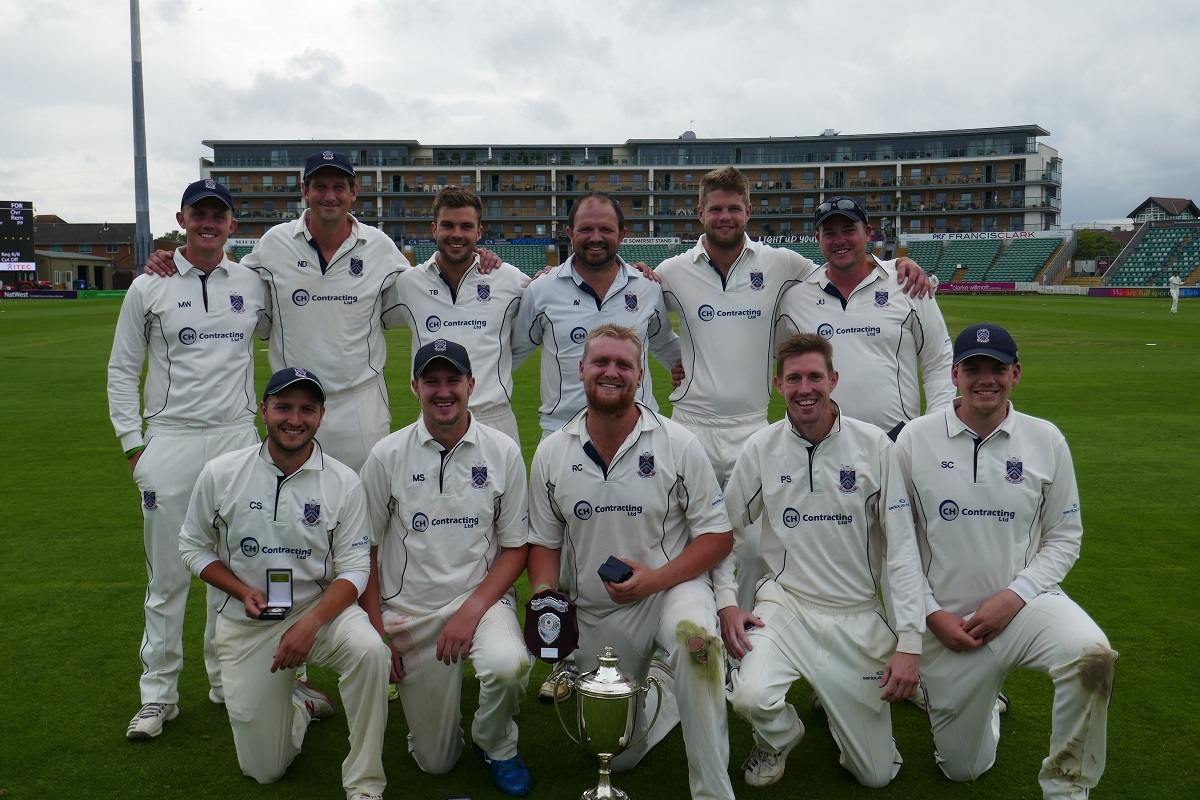 The first final of the day saw Huntspill & District win the toss and ask Bishops Hull to bat first who were put under pressure early on thanks to tight bowling from CJ Organ (1-19) & Dean Adams. Organ got the breakthrough in his 2nd over removing Liam Redrup caught well by Crawford. Change bowlers Sam Lillycrop (2-15) and Shaun Lismore (2-30) soon had Bishops Hull in trouble as they combined if the field to remove Matt Chanter before Lismore clean bowled Locke first ball leaving them 30-3 off 6 overs. Tight bowling and excellent fielding from Huntspill continued to put real pressure on Bishop Hull who were trying to counterattack from Jotty Chanter. Chanter hit a flurry of boundaries off Lismore but a false shot saw him caught for a fine 43 by Crawford as they slipped to 66-5. Randall (2-13) & Matt Counsell (2-14) stuck in their 1st overs and when Hoddinott was run out by Garner after a mix up Bishops Hull were 84-9. Sensible batting from Tyson (11*) and Sealy took them up to 106 before Sealy was caught behind off Counsell to finish the innings.

Huntspill’s reply got off to a flyer thanks to Steve Eley who took 15 off the opening over from Hoddinott whilst opening partner Lillycrop was more circumspect. Eley continued his assault on the bowling depositing Sealy effortlessly into The Sir Ian Botham stand but his entertaining 25 came to an end caught in the deep of Sealy. In his next over Sealy had Lillycrop caught for 8 to raise Bishops Hull’s chances with Huntspill 37-2 off 6 overs. New pair Jake Randall & Matt Osmant continued in a positive manner with Osmant scoring freely as he took the attack to change bowlers Matt Chanter and Liam Redrup. Randall was the perfect foil for Osmant rotating the strike well for Osmant to continue to pepper the boundaries. Huntspill reached their target in just 13 over with Randall 19 not out and Osmant 47 not out of just 26 balls.

This was Huntspill & District first win in the competition after defeat in their only other Minor Cup Final in 1991.

Man of the Match was awarded to Huntspill & District’s Matt Osmant for his superb 47 not out & 2 catches behind.

In the Major Cup Frome CC faced North Perrott CC who won the toss and elected to bat first and found themselves in big trouble straight away falling to 29-5 in the 6 over powerplay. Reece Crocker (2-22) and Tom Barton (2-12) had caused all sorts of problems for the North Perrott top order as Sam Rowswell & Max Dicker set about rebuilding the innings. Frome continued to build pressure through Dredge (1-19) and Mark Sanger but Perrott had started to rotate the strike more as the began to get a small foothold in the game. Dicker played well for 16 but fell to new bowler Mark Watts (2-29). Joseph Eckland joined Rowswell and the pair added 38 together in quick time as Perrott looked set to get up to 120. However, Eckland fell LBW to Watts looking to scoop him which saw Perrott lose momentum and finish on 110 for 8 thanks to Rowswell’s 42 not out.

In reply Lewis got Frome off to a quick start with a couple of boundaries before being adjudged LBW to Hawes which brought captain Reece Croker to the crease and it was Croker’s innings that proved to be the key. Sanger fell caught behind for 9 leaving Frome on 36-2, this brought Sam Croker to the crease and together with Reece rotated the strike well and finding the boundary before Sam fell, stumped off the excellent bowling of Retter (1-14) with the score on 61. However, there was to be no further alarms for Frome as Reece Croker (48*) and Andy Veal (15*) comfortably saw them to the victory target of 111 in the 18th over.

Frome lifted the Major Cup for the first time since 1975 after their Intermediate Cup success in 2016.

Reece Croker was awarded Man of the Match for his match winning 48 off 40 balls and 2-22.

After a bare-footed pre-match warm-up in the indoor school of excellence, the Bears took to

Ashwin Agrawal and Chris Bence opened the batting for Bear Flat with both batsmen batting steadily at the start against tight bowling from Chris Wadham and Miles Barham. Both had contributed 14 before being dismissed, Ashwin run out as he attempted to take a single to silly mid-off and Bence was caught by off Barham to leave the Bears at 38-2. That became 38-3 when Sam Vesey fell to James White to a superb reflex catch by Josh Cook. Ross Newman and Rob Wilson changed the momentum of the innings taking the attack to the bowlers, both scoring at better than a run a ball in a 64-run partnership that took the Bears into three figures before Wilson departed for 21. Newman continued to ruthlessly dispatching Newton’s attack to the boundary as he raced to an unbeaten 60 taking Bear Flat to 126-6.

The North Newton response began slowly much like Bear Flat’s. Josh Cook signalled his intent giving Ross Newman similar treatment to what he had dished out when batting! Tom Williams picked up his scoring Bear Flat were on the back foot with North Newton 57 without loss and in total control.

Shreyas Malhotra (2-14) and Jay Morris (3-7) were introduced to the attack and the pair changed the game with the ball. First Williams’s excellent knock of 29 as he top-edged a sweep to the grateful hands of Jack Mainwaring at short fine leg of Malhotra, Morris clean bowled Clemenson for 0, Street was run out for 0 and when Cook was caught by Newman of Malhotra, North Newton had collapsed to 66-4. Things got worse for Newton with another run out and a stunning caught and bowled by Ellis as the collapse continued and it was left to Morris to wrap up the victory and complete the turnaround as the Newton lower order capitulated under an increasing run rate to 93 all out.

Bear Flat lifting the Intermediate Cup followed their Minor Cup success in 2015 and if they rise through the leagues could be playing for the Major Cup in a couple of years’ time.

Ross Newman was named man-of-the-match for his 60 not out of 51 balls.

Once again, the SCB KO Cup Finals Day was a fantastic event and a huge thank you must go to Somerset County Cricket Club for use of The Cooper Associates County Ground, and the ground staff for preparing an excellent pitch.