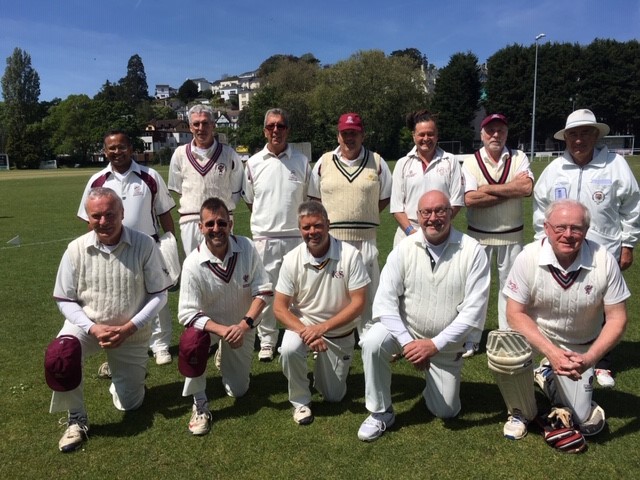 Somerset played Cornwall 60s at Wadebridge CC on Tuesday 28th May and won by 9 wickets.

Some rain had fallen in the early morning and the wicket at Wadebridge looked a little damp in places, even though it had been under cover. Somerset won the toss and put Cornwall into bat.

Locke and Stevens opened the bowling and made early inroads, taking 4 wickets for 30 runs in the first 10 overs. We had a couple of catches go to ground, but overall the fielding was aggressive and focused. Cornwall rallied a little under their Captain Stuart Ellis 34 and Myers 44 who rode his luck early on until he was run out by keeper Mike Fear, who chased a glanced ball, turned and threw back to a waiting Locke at the stumps. Further tight bowling from Brogden, Hardy and Botton kept Cornwall to 120 all out in the 45th over. Keeper Fear took a good catch behind and 2 stumpings. There were 2 run outs. Hardy took his 1st County wicket, Locke and Stevens each took 2 and Botton ended with 3 for 18.

Stephenson and Poulton opened the batting for Somerset and played steadily, hitting the bad ball and keeping the board ticking over against some accurate leg spin bowling. Poulton finally succumbed to an LBW for 54, just 15 short of the Cornwall total. Stephenson hit the winning runs in the 33rd over, carrying his bat for 69*.

It was good to see Somerset firing on all cylinders once again.

We pulled off a comprehensive victory over an ageing Worcestershire side on Tuesday 28th May. Posting 284 for 5, the game was over by teatime. A century for Keith Bell off 106 balls and 90 for Julian Harvey off 74 balls led the way.

Worcs ended the game chasing a bonus point for scoring 125.

Steve Sheppard was the standout bowler with figures of 8-5-12-3, including a stunning caught and bowled.

What can I say – this should have been our third win but we threw it away!
The game started very badly for us, with Dave Foster pulling a fetlock on his run up for his first delivery and took no part at all in the match, other than helping with the scoring and eating his usual gargantuan tea. Despite this major setback, we bowled and fielded very well, including a couple of great catches and a run-out, to restrict Wiltshire to 152 on another slow wicket at Steeple Langford (a lovely ground, but small changing rooms and the most pathetic showers ever!).
We started our innings well, with Steve Chaudoir and Nigel Manley (23) sharing an opening partnership of 49. We then slowed up a bit, but Steve was still 50 not out when we went past 20 overs and there appeared to be no real problem with the rate at less than 5 per over required. Steve C was out for an excellent 54, but with Steve Sheppard (24) continuing the good work, we were still in control. Then we started to lose wickets, or rather gave them away (myself included – better application needed), but it got to  the stage that we needed 4 runs, with 5 overs left and 3 wickets in hand but we were all out for 151!!!
Thanks to the three youngsters who played for us – Steve Crompton, Alan Rogerson and Dave Dibb – all of who made good contributions, the first two with the ball and Dave with his fielding, including a great slip catch.