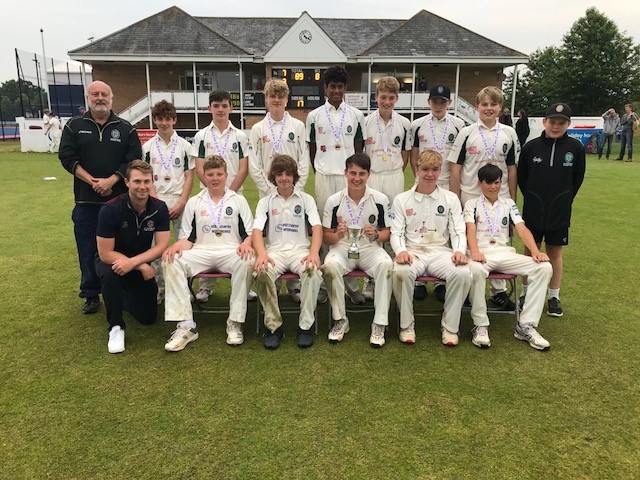 Taunton Vale Sports Club was the venue for the Somerset County Finals of the ECB National Club Under 13 and Under 15 competitions.

Club teams from all around the county had competed in their respective league competitions to reach the finals, hosted by the Somerset Cricket Board.

In very wet weather conditions teams from Taunton Deane CC and Lansdown CC produce a thrilling finals day afternoon, with the Deane the outright winners of both age group competitions.

In difficult batting conditions runs were hard to come by and backed up by an excellent fielding display the Deane bowlers were taking wickets at regular intervals.
Lansdown battled hard to post a score that their bowlers could defend. The main contributors to their total of 84 all out were, Charlie Ward (15), James Ebdon (14) and Ben Church (10). The Deane produced an excellent all round bowling display with the pick of their bowlers being Finlay Robertson 4 for 15, Alex Chaffey 3 for 12 and Bryce Beddingfield with 2 for 7.
The total was always going to be a difficult score to defend. Lansdown put up a spirited effort in the field and with the ball, making the chase difficult for the Taunton Deane batsmen. The pick of their bowlers being Will Goymer with 1 for 8. The Taunton side reached their victory target however in the 10th Over for the loss of 3 wickets. The successful run chase was achieved with significant contributions from Bryce Beddingfield (30 retired), Jed Williams-Pritchard (26) and Alex Chaffey (14 not out) at the end.

Taunton Deane CC will now go forward to the National Stage of the competition, where they will travel to South Wilts CC on Sunday 7th July to face their Wiltshire opponents.

Their innings got off to an explosive start with Charlie Sharland smashing 54 (retired) in the opening overs, to set the foundation for a large target. Regular contributions through out the innings from Aman Rao (46), Josh Thomas (23) and Rowan Keyte (23) ensured that the Deane closed on 192 from their 20 overs. Despite the total all of the lansdown bowlers stuck to their task well, with the pick of their bowlers being Nick Lawrence with 2 for 28 and Alfie Lansdown with 2 for 39.
Chasing such a large total was always going to prove difficult for Lansdown batsmen, particularly facing a strong Taunton Deane bowling and fielding unit. The Lansdown batsmen worked hard in pursuit of the total, but only Ben Adams with 50 managed to make any significant contribution. The Deane bowlers all played their part in the victory with Freddy Stevens taking 2 for 20, Harrison Hamsly 1 for 18, Taylor Flitton 2 for 3, Ben Chaffey 2 for 7 and Rufus Williams-Pritchard 1 for 2.

Our Under 15 County Champions Taunton Deane will now travel to Cornwall on Sunday 7th July, to compete in the National Stage round 1.

In very testing conditions throughout the afternoon both the Lansdown and Taunton Deane players ensured that the cricket was played to a very high standard, with both matches being extremely competitive. In addition the spirit and sportsmanship on display from all of the teams was a credit to the players and their clubs.

Our thanks on the day go to all of the players, team managers and spectators.
In addition to the scorers from the respective teams and the SACO appointed umpires, who officiated the matches in a supportive and professional manner.

A huge thank you must go to all the staff at Taunton Vale Sports Club for their efforts during the course of the afternoon. In particular to the TVSC groundsman Rob Hake. Rob ensured that the games went ahead in very inclement weather conditions and produced two superbly prepared pitches. We would like to thank him for all of his efforts throughout the day.

The Somerset Cricket Board would like to thank all of the clubs that entered this year’s competition and wish Taunton Deane CC U13s & U15s good luck in the next stage of the competition.