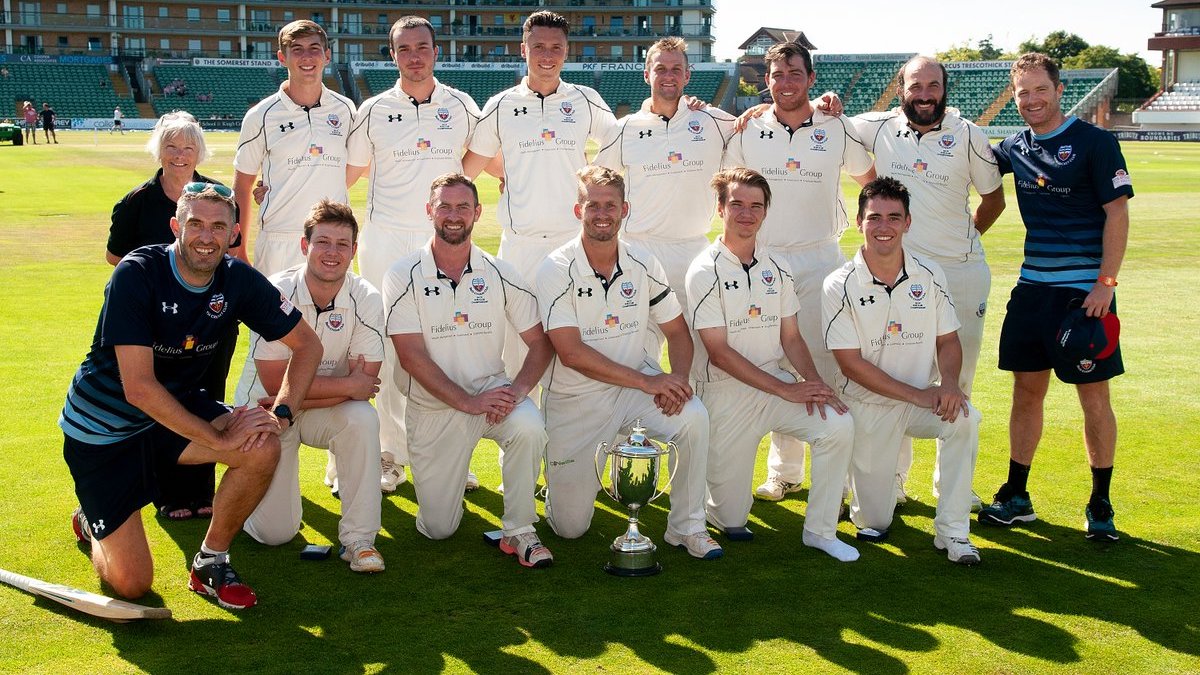 The sun shone for the SCB Knockout Cups finals day at The Cooper Associates County Ground on Sunday 5th  August and saw Trull 2nds, Bath and Temple Cloud all take home the silverware.

The first final of the day saw Trull CC 2nds win the toss and ask Cranmore CC to bat first who were soon in trouble as Toten was trapped LBW 3rd ball to Frank Spurway (2-19). Tight bowling and excellent fielding from Trull put real pressure on Cranmore  as they slipped to 28-2 with Spurway taking his 2nd wicket. A superb spell of spin bowling from Jerry Palmer (3-14) ripped through the middle order to leave Cranmore in real trouble at 50-5 and Trull very much in the driving seat. A fine 35 not out from Peter White saw Cranmore to 100 -6 from their 20 overs which looked a long way off at one stage.

Trull would have been confindent of chasing the total but soon found themselves in trouble of thier own as a fine spell of left arm swing bowling from Tom Carpenter (3-19) reduced them to 7 for 3 after 3 overs. Miles Wood (23) & Olly Barrett (20) calmed the nerves scoring as freely as anyone in the game taking the score to 51 before Barrett fell. Aaron Lake (29*) took the game on further but Wood fell with 25 required which saw Luke Bartlett enter the fray and his quickfire 18 saw Trull to thier target with 4.1 overs to spare.

Man of the Match was awarded to Trull’s Jerry Palmer for his superb 3-14.

In the Major Cup Ilminster CC faced defending champions Bath CC who won the toss and elected to field first.

Ilminster lost Hurford early with Lloyd Davies uprooting his off stump in the 3rd over. This didn’t hinder them too much as Louis Kraucamp and Sam Spurway scored quickly through the powerplay to put Bath on the back foot. The pair added 88 together with Kraucamp passing a fine half century but he was bowled for 55 by Will Arney. Spurway had reached 46 off 35 balls but was caught in the deep off Hankins with the score on 115 with 4 overs to go. Good death bowling from Davies & Dave Ford (2-18) kept Ilminster to 145 for 6 from thier 20 overs with Charlie Vickery finishing unbeaten on 20.

Ben Ackland got Bath off to a flyer with a quick fire 18 before he was bowled by Grinter.Tom Hankins who was man of the match in 2017 continued the Bath charge adding 17 from 11 balls but he was caught of the bowling of Vickery with the score on 41 and he was quickly followed back back Scrivens who ran himself out leaving Bath 46-3 off 7. This brought Tim Rouse to the crease to join Hewett and the pair set about rebuilding. Hewett had struggled but had appeared to break the shackles hitting a huge 6 in to the Ian Botham Stand but he fell LBW for 22. Rouse picked up the run rate with an array of sweeps and reverse-sweeps to get Bath towards thier target and he reached 50 off 36 balls as they required 8 to win from the final over. Charlie Brain had supported Rouse well was out for 14 and new man Brown found himself on strike with 7 to win off 4 balls. A dot ball followed by a single brought Rouse back on strike and he calmly stucked the 5th ball for 4 through the covers then the last ball over the top for 4 to finish 68 not out, sealing back to back Major Cup wins for Bath.

Tim Rouse was awarded Man of the Match for his match winning 68 off 46 balls which included 9 fours and a six.

The Intermediate Cup was contested by Temple Cloud CC and Street CC who were asked to bat first..

After a very tight opening spell from Simon Mahoney and Chris Diaper (2-8 off 4 overs), left Street in deep trouble. Ben Trotman (40) and Kyle Wood fought back for Street and slowly built a score that would give Temple Cloud a challenge on what was, by now, a well used pitch.

Further wickets from Andrew Mortimer, Rob Head (3-25) and Miles Hackett limited Street to 125 in their 20 overs which appeared to be a below par total.

Temple Cloud’s start got off to a fast start with Hackett finding the boundary with ease in his aggressive innings. After being dropped early on Hackett fell to a fine catch by Wood and the 2nd wicket soon followed when Mortimer was run out. This brought Kevin Curtis to the middle to join brother Simon who had being doing a fine supporting role. Kevin was quick to punish anything loose but the game remained in the balance when Simon fell to another brilliant catch by Wood.

Courtney Forrest joined Kevin Curtis at the crease and the pair sensibly to keep up with the required rate with Curtis continuing to pick up the boundaries when needed.

It was fitting that Curtis his the winning runs with 3 balls to spare finishing 43 not out and was later named man of the match.

Once again the SCB KO Cup Finals Day was a fantastic event and a huge thank you must go to Somerset County Cricket Club for use of The Cooper Associtates County Ground, enabling the games to be live streamed and the groundstaff for preparing an excellent pitch.