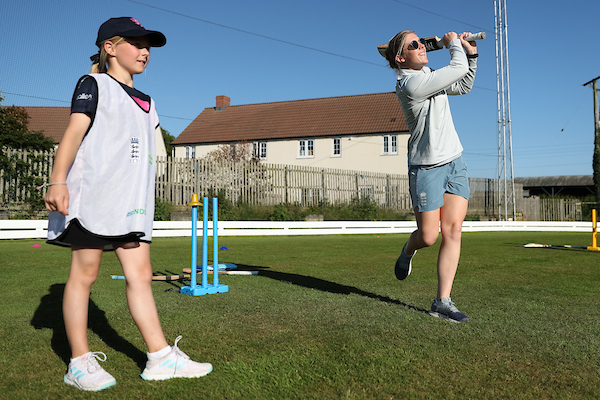 Knight enjoyed spending time with the women’s softball and junior girls’ teams, and left a very positive impression, sharing her wealth of experience and love of the game with the players taking part.

The opportunity for the visit came thanks to a #Funds4Runs grant Ilton received last year from LV=. The grant has been used to buy hardball kit for the women’s team, who have since started making good progress in the hardball game.

#Funds4Runs is a £1million initiative co-funded by LV= and the ECB to help grassroots cricket clubs recover from the COVID-19 pandemic.  Its aim is to support 4,000 coaches and at least 20,000 players from all levels of the game each year.

Amber Casey, Ilton CC women and girls co-ordinator, was delighted with how the visit went:

“On Monday evening, our club was buzzing with women and girls for the guest appearance of Heather Knight. We got to experience something that if I’m honest, I wasn’t ever sure we would.

Instantly, Heather made everyone feel at ease and it was great to witness the women play with a smile on their faces. The girls absolutely adored having her there. For many of us, she is our role model. She inspires many to play the game and to have her at the cricket club was an honour. We are very lucky, and would like to thank LV= for allowing us to be a part of it all. A big thank you to our coaches: Damian, Colette, Bob and Carl.”

In Somerset ahead of the four-day test match against South Africa at the Cooper Associates County Ground in Taunton next week, Knight has strong West Country connections. She grew up in Plymouth, played cricket for Devon as a teenager and has represented Western Storm for the last six years. Having been capped over 200 times across all formats, the England skipper will be eager to continue where she left off in her last test appearance in January, when she made her highest ever international score of 168*.