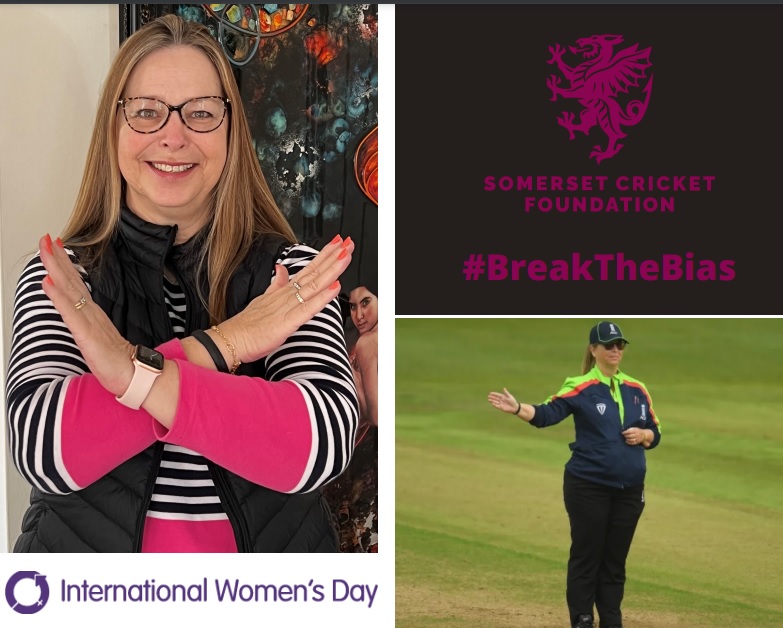 In 2021, Yvonne made ECB Premier League history as one half of the first all-female umpiring duo, when she officiated alongside Anna Harris in the West of England Premier League game between Downend and Bedminster.

She lives in Bleadon, just outside of Weston and has been an ECB ACO umpire since 2009, with experience in Men’s Premier Leagues SNEL & WEPL, the Rachael Heyhoe-Flint Trophy, Charlotte Edwards Cup and The Hundred as well as BCEW (Blind Cricket England & Wales) to international level.

“Through umpiring I see the astonishing talent that is coming through in the women’s game and it’s great to now be breaking through the glass ceiling.”

What inspired you to take up umpiring?

My Mother played cricket and so did all her brothers, my cousin played for Warwickshire my grandfather however was an Umpire and my love of cricket was instilled at an early age.

What’s the general reaction from the players when you arrive at a game?

The general reaction these days is of acceptance as clubs and players get to know you and your reputation but in the past I have quietly smiled to myself at the shocked expressions on faces, many times I have been asked if I am a scorer (Many scorers are female). On one unforgettable sunny afternoon I heard two ‘Chaps’ discussing the fact I was obviously carrying my husbands Umpiring kit for him! On that occasion I went into the ladies’ toilets changed into my kit and came out fully dressed for the match including my hat, they nearly fell off their bar stools!

How proud were you to be asked to join Anna as the first all-female umpiring duo in ECB Premier League cricket?

I was of course very honoured to be asked and at the same time was amazed that it had taken until 2021 for this ‘Glass Ceiling’ to be smashed, any excuse to stand with Anna she is an amazing umpire and a rising star. We repeated this moment the following week in Wales.

You’ve umpired some high-profile fixtures over the last year, what’s the next step for you?

I have stood down from the Professional game as I feel at my age it is time to leave the pressure cooker of televised games to the younger Umpires, I am hoping that my journey will take me towards more mentoring and coaching of officials and I would love to be a match referee. Although I have left part of my cricket journey behind it is no way the end for me, new beginnings are just around the corner.

What advice would you give to any female interested in pursuing umpiring?

Do it. Do your training and get out there, it really is nowhere near as scary as you may think. Just always remember to breathe before you give any decision and work as a team with your partner and the scorers, you are never alone. One ball at a time is my motto. 1 of 6 – 2 of 6 etc.

It’s beyond rewarding, its exciting to be so close to the action, it’s a much better view than from outside the boundary.

I’m always here on the end of a phone to discuss any points that might have arisen during your match, lean on me.