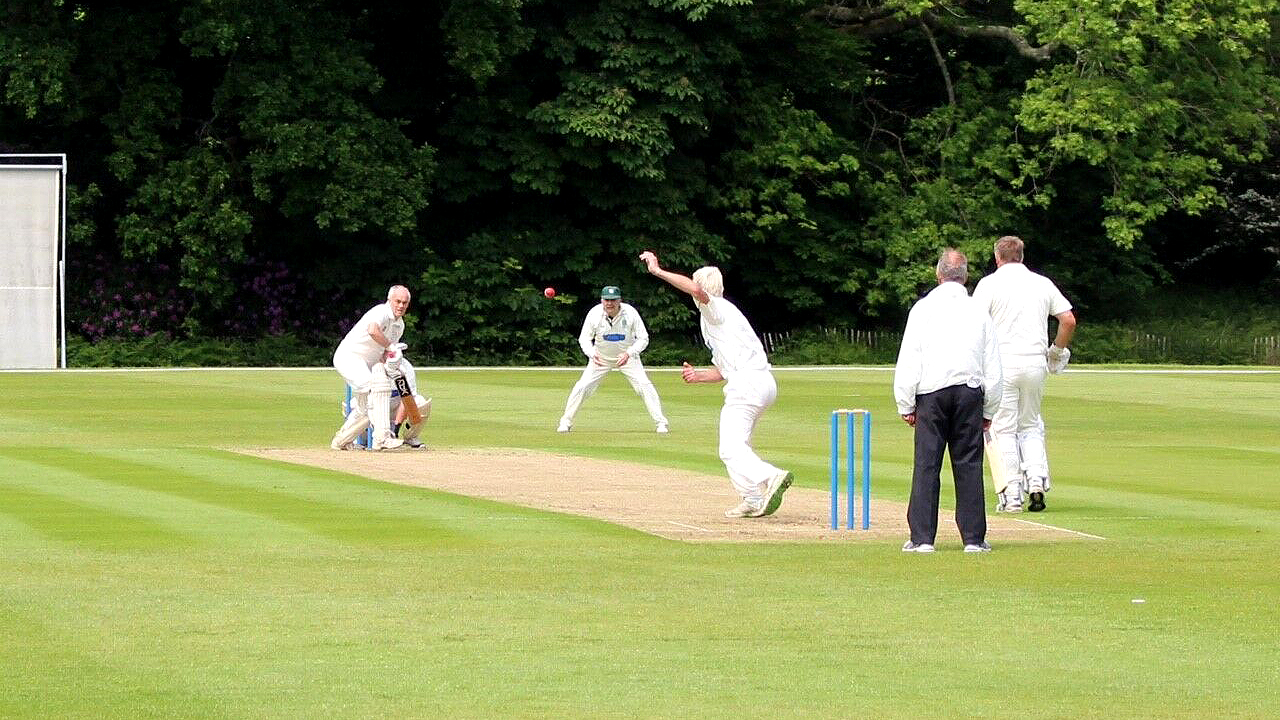 A team defeated in National Semi-Finals

I have already written that the Somerset over 60s A team finished top of our competitive group and so qualified for the national knockout phase as fifth seeds. This at least guaranteed us a home tie in the first round.

In my absence Brian Brogden led the side, and we had our top five batsmen all available for the first time. We won the toss and inserted Oxfordshire- last year’s semi finalists. The bowlers all performed well, but none more so than Brian Brogden yet again whose figures of 1-15 were outstanding. The batting conditions were not easy but chasing only 156 was made more difficult when we were 3-2. However Graham Poulton(22)and Andy Ashfold(54) initiated the recovery before Tony Scott(37 no) batted sublimely to ease us to a 4 wicket victory with the help of a cameo innings by Neil Johnson.

Our last 8 game was in Warwickshire and although we had our bowling attack intact with my return we were short of three of the five batsmen. We won the toss again, inserted the opposition and watched as they progressed to 62-2. However we got lucky, Mike Smith captured three very deserved wickets in his nine overs (3-30) and Brian Brogden more than matched that with his 4-28. But from 99-9 would their last wicket partnership of 19 be critical? It nearly was but Mike Fear (30) and Tony Scott(28) provided the big partnership that enabled us to crawl over the line and win by three wickets.

At Hertford we lost the toss, just one of the factors that lost us the game. We started superbly as Paul Ashton caught their England opener off a fine Iain Locke delivery in the very first over. Then their two other England batsmen put on over 150 without offering a chance, despite testing spells from Brian Brogden and Tony Scott in particular. This enabled them to launch an attack at the end of the innings to post 226. Our innings was different and it proved too difficult to recover from 41-3. There was a glimmer of hope when Paul Ashton(50) and Andy Ashfold(66no) were at the crease together for with 84 needed off the last ten overs we still had big hitters to come. However we were unable to score boundaries, fell further behind the clock and lost wickets to end on 192-9 – a disappointing end to an otherwise successful season.

Now for a number of thanks; to all 18 players who made themselves available and played in three or more matches through the long season; to the umpire and scorer- the husband and wife team of The Allbuts; to the Chairman, Brian Pearson, for his continual interest and support and especially to the B team captain, the ever helpful Steve Pursey, who had to pick up the pieces after the vagaries of my selections. In addition, my very grateful thanks indeed to the other advisors on the selection panel – Iain Locke, Brian Brogden and our manager Dave Yorath – they had to put up with my endless emails each and every week.

It is good to take a break from any sport for it is an important time to remember the positives, to reflect on the mistakes, to recover physically and to return with renewed enthusiasm the following season. Winter well and see you in 2019.

Tough Season for The Over 60s 2nds

This was an extremely disappointing season, with the 2nd xi finishing bottom of their division, winning three and losing seven games. Amazingly, after three games the 2nds were top of the table, having beaten Worcestershire and Devon and losing against a strong Welsh side, despite needing just 47 from the last 10 overs with 7 wickets in hand. There was a match winning performance by Rich Newport against Devon, scoring 116*, as well as a great catch in the deep and 3 wickets. Steve Curnow had 10 wickets in those three games and Neil Johnson had scored a wonderful 80 in the loss v Wales. Everything was looking rosy. Top of the table and deservedly so. But then as the hot summer set in, Neil, Rich and Jerry Palmer were called up for first team duties and results took a turn for the worse. A feeble effort against Gloucestershire, all out 142, and then two consecutive defeats to Oxfordshire, both times well and truly thrashed. And then another thrashing against Wales, losing by over 100 runs for the third consecutive game. Worcestershire appeared to be a side that could be beaten, but they successfully chased 189, (set up by 74 from Rick Hutchinson), within 38 overs and for the loss of just 3 wickets. Next up, a real bottom of the table clash. And Devon lost to us again. Hurrah!!! Another win – we needed that! Rick continued his good run of form with 72, and a welcome return to the side for Pete Rebera, scoring 50 and taking two wickets. Gloucestershire for the last game, if we won and the other results went our way we might make the Play-offs. A century for Kevin Smith defeated Somerset’s chances of climbing off the foot of the table.

We travelled to Leicestershire for a final game in the Bowl. They scored 238 for 2, and we were never in the game, stuttering to 161 all out.

Rick Hutchinson finished the season with the most runs, 287 at an average of over 35.

It is difficult to analyse exactly what went wrong in 2018. The batsmen scored too slowly, the bowlers didn’t take enough wickets, the fielding often lacked urgency, and with the exception of Worcestershire, the opposition were fitter than us. The failure of batsmen to look for quick singles, to turn ones into twos, and the ease of the opposition to do just that could have cost the 2nd xi as many as thirty runs a game, but probably our failures were a combination of all the above.

Despite the poor results, the season was enjoyable, the weather was good, the teas were tasty and there were many memorable moments.

We were indebted to Nigel Manley for his organising abilities, Chris Norton for his umpiring skills and to Tom Gibbard for his scoring expertise.

With the addition of one or two match winners, and one or two youngsters we would have had an entirely different season, and the one thing about being bottom of the league is that things can only get better!

I’m optimistic that 2019 will be a great year, not just for the seconds, but for Somerset Senior Cricket as a whole