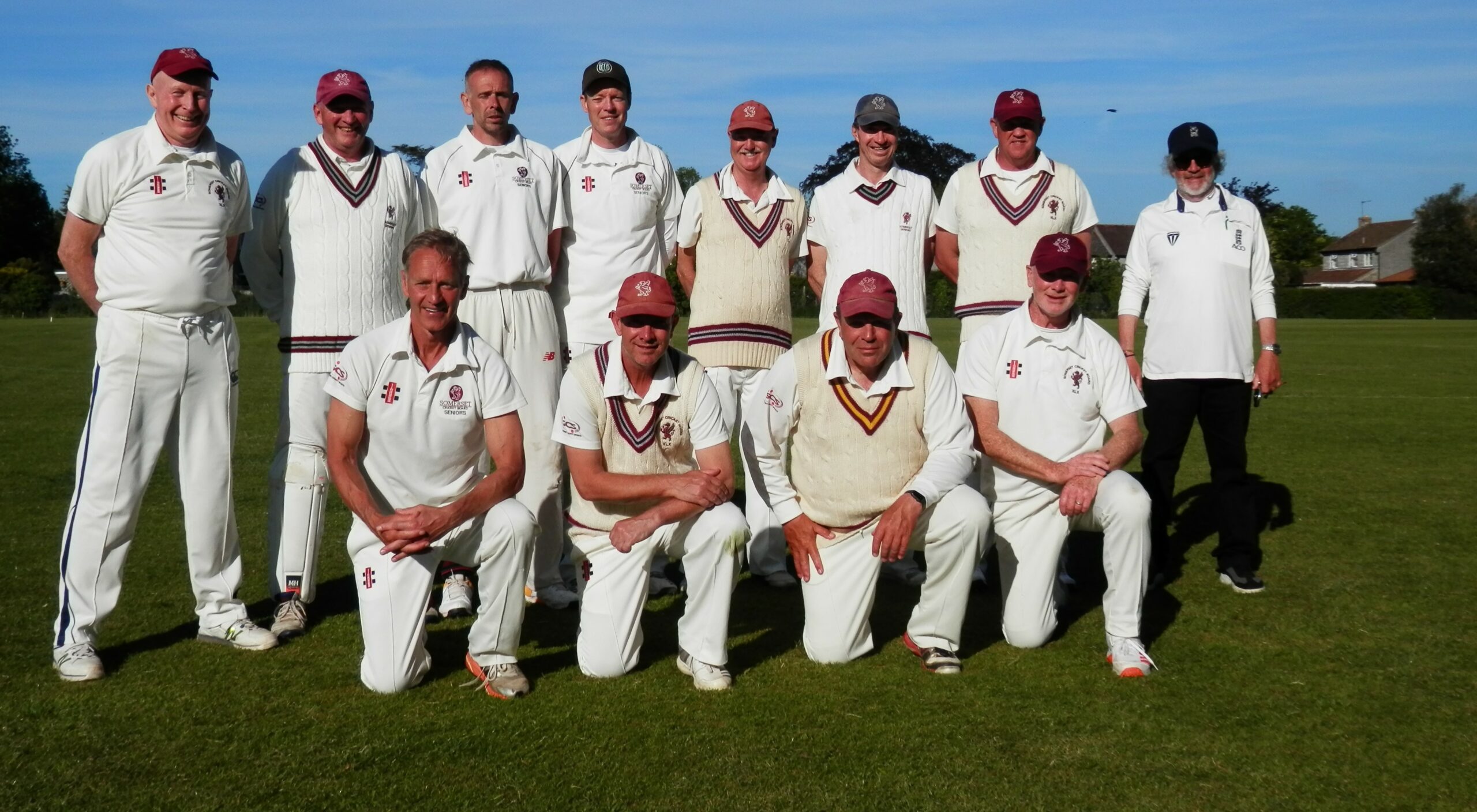 The season began with Covid restrictions still in place. Added to that the weather was poor and so pre season friendlies were limited to just two games out of the five sheduled.

The ECB 50’s were also starting in June which is much later than usual.

The other friendly was against Queen Camel CC who were celebrating their centenary. This was a more comfortable win by 23 runs after we had scored 187 for 6 off our 40 overs. Marc Jenkins (65) top scored and Clive Hamblin (4 for 13 off 6 overs) was as effective as ever.

Into the group games proper and the Southern Counties team starting a month before the ECB team lost the first game to Hampshire by just 3 wickets with 2 balls to spare. Somerset 223 – 7, Hampshire 226 – 7 off 44.4 overs. The game was played in arctic conditions and was not much fun, especially bearing in mind the result. It actually sleeted during that game, not something you see very often in early May.

The second game was against Dorset at Hinton Charterhouse CC. Our batters hit top form amassing 305 for 4 off our 45 overs. Pete Solomon (82), Vince Milton (80) and Neil Hendy (60 off 40 balls) doing the damage. Dorset wilted under our opening attack and were reduced to 5 for 3 at one point. No way back from there and we ran out winners by 163 runs. Dorset bowled out for 142 in 38.1 overs. Jason Squire, new to seniors cricket, announced his arrival with 3 for 13 off 5.1 overs.

Next up was the long trek to Cornwall and the picturesque ground at Mount Ambrose. Cornwall won the toss and batted scoring 193 for 9. Tom Gliddon (4 for 41 off 9 overs) was the pick of the bowlers.

Ian Bishop and Mike Caddick put on 83 for the first wicket and despite a slight wobble in the middle order we ran out comfortable winners by 4 wickets with 4 overs to spare. Ian Bishop (53) top scored for us.

The return fixture versus Hampshire was next up and despite posting a reasonable 195 all out (Pete Solomon, 49 and Neil Hendy, 41) we were well beaten by 8 wickets by a strong Hampshire side.

On a hot humid day in mid June we took on Dorset at Whimple. A lovely ground and a very flat wicket. Batting first we scored our highest total of the season, 328 for 5 off our 45 overs. Vince Milton (64), Graham Johnson (91) and Rob Moysey (130 no off 79 balls). Rob’s innings was impressive to say the least. 11 fours and 5 sixes as he took the luckless Devon bowlers apart.

Devon did their best to chase the total down but despite 109 off 85 balls from Steve Broad, they were almost 100 short come the finish. Ian Smith (4 for 34 off 9 overs) was our best bowler.

Dorset at Compton House were next and they turned up with a different side compared to the first game. They batted first scoring 281 for 7. Graham Johnson (3 for 71 off 7) was our best bowler, but to be fair, Dorset smashed it to all parts in the last 10 overs.

We crumbled to 174 all out, though Mike Caddick did score 62 which was a good effort under the circumstances.

The return fixture against Cornwall was at North Curry, and once more our batters came to the party. Batting first we totalled 240 for 8, Pete Solomon (85) top scored with Jason Squire (30 off 26 balls) and Neil Hendy (26 off 11 balls) chipping in lower down the order. Cornwall were never in the hunt and subsided to 174 all out off 42 overs. Graham johnson (3 for 63 off 9 overs) was the pick of the bowlers.

The last game in the group was against Devon also at North Curry. Devon batting first scored just 179 for 7, Rob Moysey (3 for 35 off 9 overs) was our best bowler. We ran out easy winners by 5 wickets with 10 overs to spare. Runs being shared around the top order.

Coming second in the group was the best performance in the group stages by the SCSC team and thoroughly deserved. 5 wins and three defeats is a record to be proud off.

In the quarter final we took on Warwickshire in Selly Oak, Birmingham. Harborne CC to be precise. A green oasis in the centre of Birmingham.

Unfortunately things did not go our way, and after a decent start, 69 for one after 16 overs, we subsided somewhat to 178 all out in the last over. Pete Solomon (48) top scored. Warwickshire put on 57 for the first wicket and did not really look back as they passed our score 4 wickets down with 10 overs to spare.

A disappointing end to the season, but overall it was a marked improvement on previous seasons.

Meanwhile the ECB side starting a month later and with what turned out to be a reduced fixture list because of Covid made the long trip to Basingstoke for the first game against Hampshire.

Batting first we scored 160 for 7 off 36 overs. Andy Sapey (65) top scored. There had been a rain interruption during the game which reduced our overs by 9. Duckworth Lewis came into operation, something that would come back to haunt us later in the game.

Hampshire started badly losing early wickets and we were in the game. At 98 for 7 we actually looked favourites, but a seventh wicket stand of 67 by Fourie and Donaldson won the game with 3 overs to spare. However had the Duckworth Lewis rules been interpreted properly, Hampshire would have needed 176 runs to win rather than 161. This may not have changed the result but it was disappointing and something we learned from pretty quickly.

The second game versus Wiltshire was at Trowbridge CC. Batting first we scored 262 for 4, Andrew Stevens (80 off 99 balls) and Brian Stone (79 off 48 balls) topped scored for us. Wilshire in reply never really kept up with the rate and wickets fell at regular intervals. They were finally bowled out for 153 in 43 overs, well short of the target. Terry Clark (3 for 31 off 9 overs) was our best performing bowler, though Brian Stone with 2 for 16 off 7.1 overs was by far the most economic.

Game three was against Devon at Bridgwater CC. Devon won the toss and elected to bat. Early on our bowlers were well on top with Devon wickets falling at: 1, 8, 12 and 34. However after that partnerships developed and runs began to flow. Their final total was 196 for 8. Ayre and Lammonby doing most of the damage. We got off to a reasonable start and at 109 for 4 looked favourites. Unfortu- naely we lost wickets and the middle order somewhat subsided. All out 138 with 8 overs remaining was not the result we wanted.

The two games affected by Covid were against the Channel Islands, who pulled out of the competition in April, and the Isle of Wight, who did play some games but only at home. So effectively we “won” these two games without bowling a ball. That meant that winning our last two games was important as due to other results, if we did that then we would progress to the knockout stages.

The first of these games was away to Cornwall. Once more we trekked off to Mount Ambrose. Batting first Cornwall posted 201 for 8 off their 45 overs. Not a huge total but enough to mean we had to bat well on a slow low wicket. Brian stone was once again effective with his slow left armers, (3 for 16 off 9 overs).

Despite losing Sapey and Bishop early on (16 for 2) Andrew Stevens and Pete Solomon repaired the damage and at 100 for 2 with twenty overs to go we were in the driving seat. However things began to unravel as we lost wickets and despite a spirited 23 off 29 balls by Rob Moysey we were bowled out for 170 with an over to go. A very disappointing result in a game we had to win to keep our knockout hopes alive. Pete Solomon, (53 off 63 balls) top scored for us.

The last game against Dorset was therefore somewhat irrelevant, but we would decide who out of Dorset and Cornwall would progress to the knock out stages. This was because all three previous efforts to play this game versus Dorset had been thwarted by the weather.

So Clevedon was the venue on Sunday the 1st of August. The last date the ECB would allow us to play. The weather did try and intervene, but after a delayed start a 36 over a side game began.

Somerset won the toss and batted first. Partnerships across the top order meant the going was steady if not spectacular. Towards the end of our innings we need quick runs to post a competitive total and Brian Stone came in at four and smashed 36 off just 25 balls to ensure we got to 205 for 7 off our 36 overs. The foundation to this onslaught came from Andrew Stevens who top scored with 58.

Dorset got off to a good start but the rate was climbing and no matter how hard they tried they could not get the accurate bowling away. Mike Harper batted through for 86 but Dorset just ran out of steam in the last few overs coming up 12 runs short. Brian Stone was the pick of our bowlers (3 for 42 off 8 overs).

The result meant Cornwall and not Dorset would go through to the knockout stages. Unfortunately Cornwall fell in the first round, but Devon and Hampshire made it right through to the semi finals losing there to Lancashire and Essex respectively.

Another season over and another disrupted by Covid. Hopefully things will return to normal in 2022.

I would like to thank all the players, umpires and scorers who made this season possible and also the clubs that hosted our games. Your enthusiasm and commitment is much appreciated.