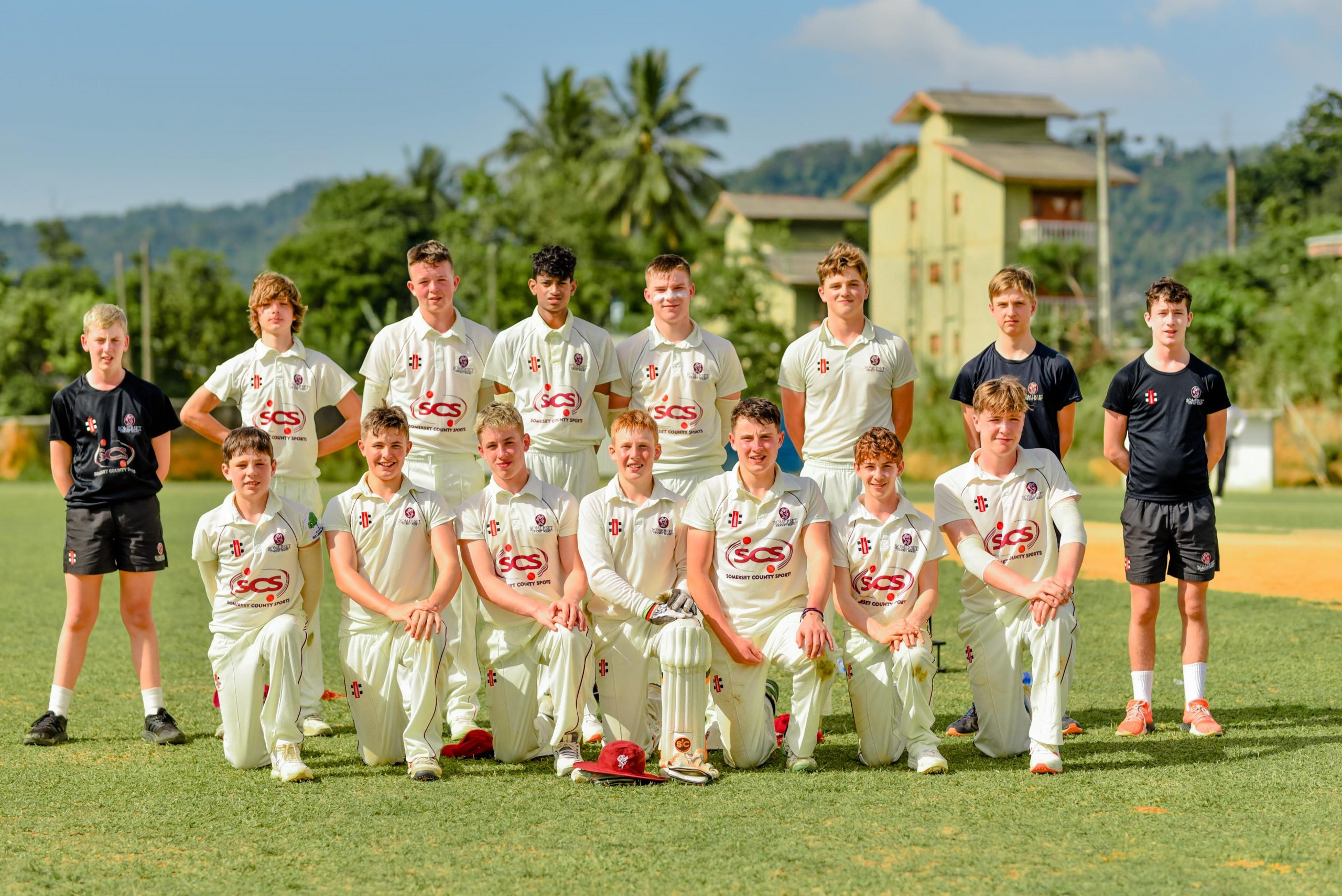 During the February half-term fifteen Somerset U15 County Age Group cricketers travelled to Sri Lanka to experience an overseas tour.

During twelve days away, where they divide their time between Colombo and Kandy, players are able to play in five fixtures alongside two training opportunities. Players are also given cultural experiences, including a visit to the world heritage site, Temple of the Tooth Relic.

The five match play opportunities act as a pre cursor to the summer season but also give players the chance to put skills learnt during the winter into practice.

After a training day at the Pallekelle International Stadium, match day one saw the Under 15’s travel to Wickramabahu College, Kandy – a beautiful ground with the backdrop of a Sri Lanka mountain. To everyone’s surprise the match concluded without an outcome as a rain shower bought an end to the Kingswood College (Kandy) run chase. Earlier Illminster’s Michael McNee (60) and Clevedon’s Jack Harding (28) had combined to allow Somerset to post a competitive total.

After Day One’s wash out fixture, Day Two was adjusted to allow the boys to experience two Twenty20 matches, both of which culminated in tense finishes. In Game One Wickramabahu College won with one ball to spare despite Charlie Sharland’s (Taunton Deane) brutal 115 off just 52 balls. In Game Two Somerset again posted a competitive total of 165 thanks to Ben Chaffey’s (Taunton Deane) 70. Despite the best efforts of McNee (4-13) the score was reached with seven balls to spare.

After the transfer to Colombo, The P Sara Oval was host of the next fixture for the boys, the ground is a test match venue but also boasts Muttiah Muralitharan and Ragana Herath (1000 test wickets between them) as regular players. After electing to field first Somerset made immediate inroads into the oppositions batting with Harding and Aman Rao (Millfield School) picking up two wickets a piece. The middle order provided some resistance before the introduction of Claverham’s Max Horton (4-13) put an abrupt end to the innings. The second innings was of contrasting tempo as Rew (60*) and Sharland (60) dominated the opposition bowlers to chase down the total in just eleven overs. The early finish enabled us to play a fifteen overs a side game to provide additional playing opportunities to players.

St Benedicts College were the opposition for the penultimate game of the tour at Moors Sports Club. The ground lies in the heart of Colombo within close proximity to the main Buddhist temple but also the newly built Lotus Flower Tower.

Batting first Somerset reached 255-6 from their 40 overs with Ben Chaffey scoring a brilliant 109*, including a six over the Colombo traffic to bring up his hundred. In reply St Benedicts got off to a slow start but managed to keep up with the rate throughout the majority of the innings, however some tight bowling in the latter stages of the game and two crucial wickets for Clevedon’s Louie Woodland gave Somerset the victory by 14 runs.

Royal College, Colombo were the final opponents of the tour and with 8,000 pupils to choose from the boys knew they were in for a tough game.

After choosing to bat first Royal College posted a respectable 235-8 from their 45 overs. The score could have been much more favourable for Somerset if not for some superb batting by their number four who finished 85 not out. Three bowlers picked up two wickets; Shay Sainsbury (Long Ashton), Josh Thomas (Taunton Deane) and George Thomas (Taunton St Andrews). In reply the Somerset innings never really got going, however, Ben Chaffey this time coming in at number nine continued his fine form from the previous day with an emphatic 70* that kept Somerset in the hunt. Unfortunately, the final wicket fell in the 38th over with Somerset 38 runs short of the target.

“The tour provided some fantastic learning opportunities for the boys both on the field but also importantly of it. Being away from home in a country like Sri Lanka provides a superb environment for players to learn key character and life lessons that I’m hopefully they can use both in a cricket context but also outside of it. I’d like to thank the Cricket Board staff for their hard work in allowing the tour to run smoothly but also Lions Sports Travel, the coaches (Andy Payne and Andrew Griffiths) but also the players for the way they conducted themselves throughout the two weeks.We look forward to next years tour which will again include the Under 17’s Girls Squad.”