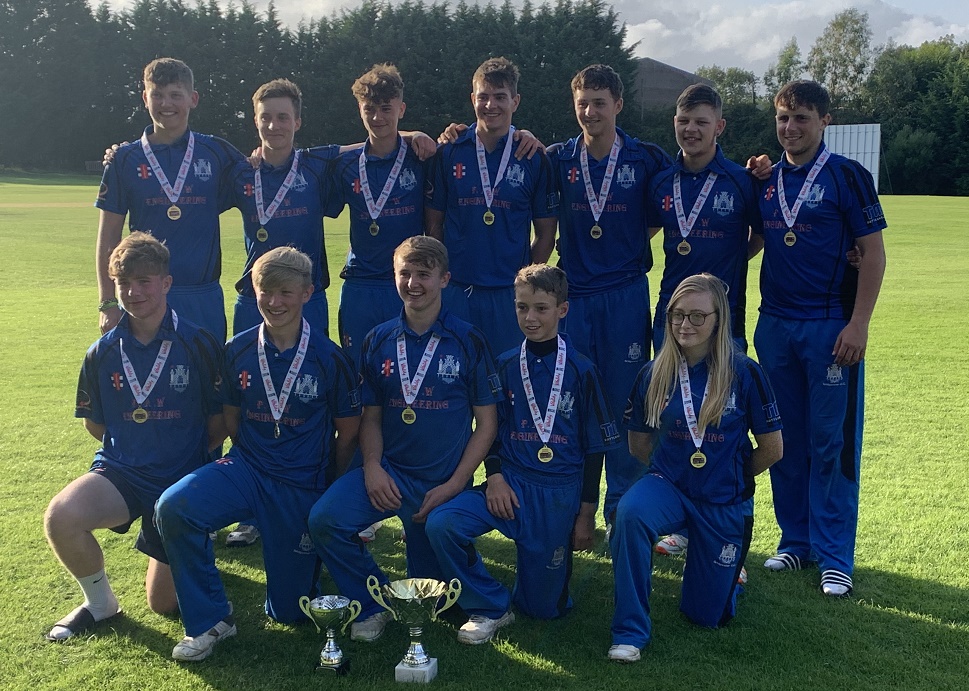 The Somerset competition, sponsored by Somerset County Sports, has seen 25 teams battle it out to reach finals day. Over 600 young players have taken part in the competition so providing some serious entertainment on Finals Day again superbly hosted by Uphill Castle CC & Weston-super-Mare CC which saw the 8 finalists battle it out in 15 Over Quarter Finals before the Semi-Finals and Final.

After the amazing efforts of the Groundstaff at both Weston-Super-Mare CC and Uphill Castle CC play was able to start on time despite the terrible weather in the week leading up to Finals Day.

On the Weston-Super-Mare CC pitches Deane Diamonds overcame the Weston Super Kings by 7 wickets. Davis Trego top scored for Weston with 30 in thier total of 77 which was a good recovery having been reduced to 22-4 thanks to a brilliant spell of 3-13 from Harry Smith. Dan Parsons top scored for the Diamonds with 26 as they chased the target in 13 overs. Yeovil Whirlwinds held their nerve vs the Hinton Hornets who looked set to chase down they 106 they needed to win as Patrick Crawford blazed 43 but 3-6 from Sam Fuller pegged back the Hornets to seal a place in the Semi Finals.

At Uphill Castle CC, Bridgwater Red Sox posted 103-5 from their 15 overs, with Ned Leonard retiring on 40 as per the competition rules. Keynsham Knight Riders never got going in reply, and the score was always out of their reach as Tom Bellinger and Callum Pope picked up two wickets apiece with James Burston hitting 23*. The Saints saw off the challange of the Clevedon Coast Busters reaching the 84 required to win with an over to spare. Freddie Wolfenden took a wicket, a catch & two run outs for the Saints and Tom Hazell-Evans top scored with 28.

The semi-final Uphill Castle was a rematch of last year’s final between Bridgwater Red Sox and The Saints. Bridgwater fielded first and were excellent as Saints were bowled out for 49. Tilly Bond was outstanding as she took 4-3 in an incredible spell of bowling, while Pope claimed 3-5 and Seth Locke 3-9. In reply, the Red Sox opening pair of Bellinger (19no) and Pope (26no) made light work of the target, getting over the line within seven overs without losing a wicket.

At Weston-Super-Mare, Yeovil Whirlwinds batted first in the Semi Final and posted 149 thanks to 41 from Will Hanranhan, 39 from Jack Veale and 33 from Will Chesterman. The Deane Diamonds set off like a train with Harry Smith hitting a quickfire 33 but wickets fell regularly as Yeovil looked to be cruising into the final. Enter Toby Stone who wasn’t about to go down without a fight and launched an incredible display of hitting as he raced to 40 by hitting four sixes in 4 balls and came back to the crease with the score on 99-9. Further boundaries from Stone gave hope as he reached 62* but a mix up saw McClure run out with Diamonds 20 short of victory.

The final pitted the defending champions Bridgwater Red Sox against Yeovil Whirlwinds who has reached their first U19T20 Final.

The Red Sox won the toss and elected to bat but hings didn’t quite go to plan, as Pope and Bellinger were dismissed early falling to Sam Fuller & Ben Watts. Ned Leonard (32) and Dominic Court (30) set a good platform for Bridgwater to build on but the pair fell to Dan Ewens in consecutive overs to leave them 90-4. They continued to lose wickets at key stages, though, and were eventually bowled out for 116 thanks to some great fielding and bowling from the Yeovil Whirlwinds.

Bellinger and Leonard opened the bowling and they set the tone brilliantly, as Yeovil slumped to 23-4 losing Hanranhan, Veale, Laney & Ewens. Nonetheless, Yeovil Whirlwinds were still in with a good chance, and the pair of Will Chesterman and Sam Fuller put on 57 for the fifth wicket as they first got thier team back into the chase and then started to take the game away from Bridgwater. Bond claimed the vital breakthrough, trapping Chesterman for 25 and the game was very much in the balance.

Sam Fuller continued to pick up singles and the odd boundary as he looked to see his side home, and with two overs to go, Yeovil needed 14 to win. Fast bowler Leonard (0-11 from 4 overs) produced a very tight over, until the last ball of the over was Chinese cut for four by Fuller, which saw Yeovil needing eight from the last. Seth Locke bowled an excellent over stopping any boundaries and it was down to the final ball with three was required off the last ball to win and two for a super over.

Fuller picked out midwicket as they ran through for a single, but a clean pick up and throw from Bellinger meant it was Bridgwater Red Sox who claimed a 3rd consecutive title by the narrowest of margins in probably the best U19T20 Final today.

The presentations for the Finals were made by Somerset County Cricket Club’s Paul van Meekeren which included the Player of the Match Award to Sam Fuller of the Yeovil Whirlwinds for his 2-19 & 46 not out.