Somerset Seniors Cricket provides the opportunity for those who, while progressing in years, have lost none of their enthusiasm for the game. We have Three Somerset Over 60s teams, all competing in national competitions and you can read reviews of previous season’s below. We are always welcoming of new players, so please contact us If you are interested in playing in the coming season. 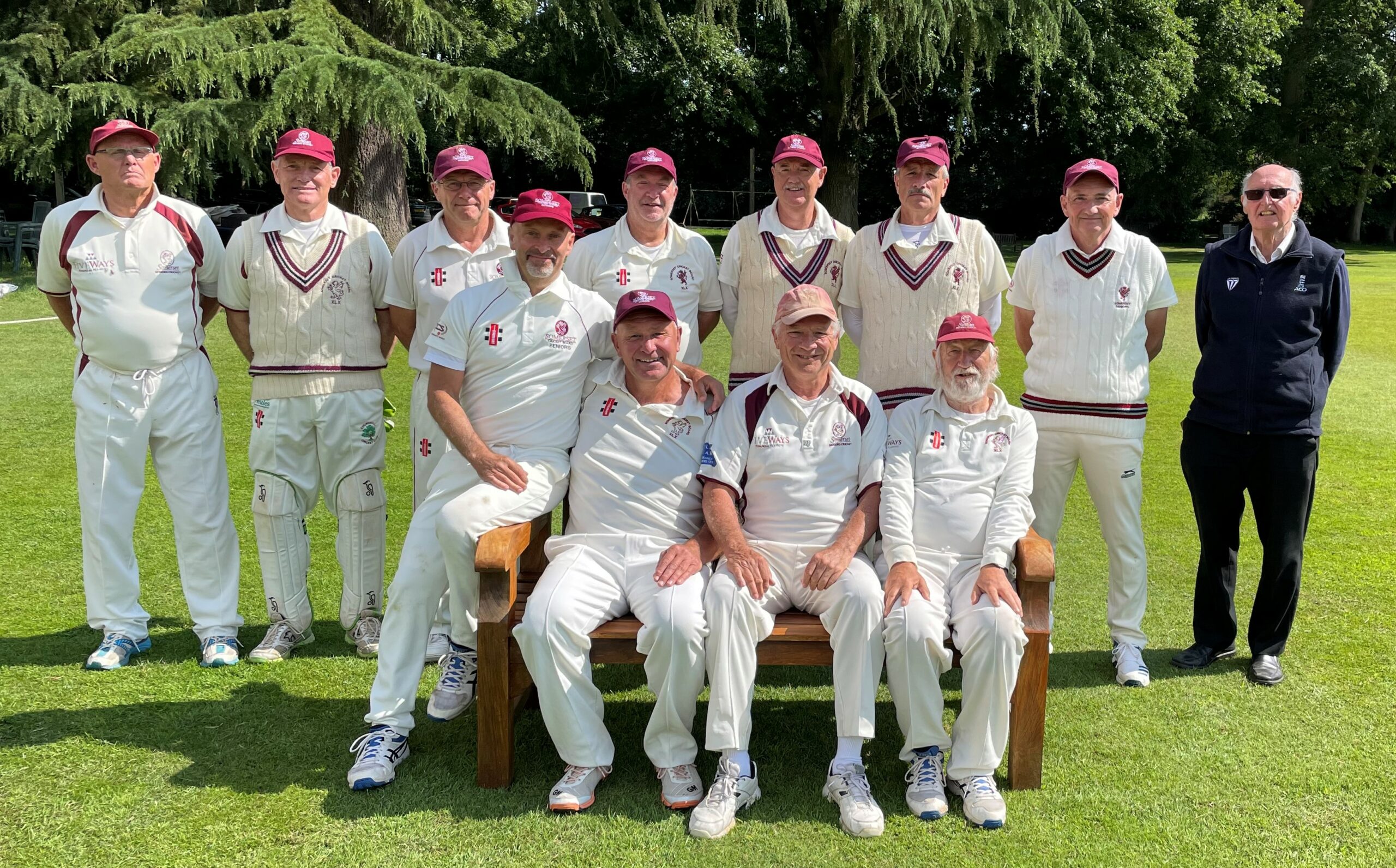 Strictly in terms of results, the 1st team season was a disappointing one but there was no disgrace in losing our matches against the much improved teams from Cornwall, Wales and Gloucestershire. We enjoyed comfortable victories over Devon, twice, and Wiltshire, with our return fixture being lost to the heatwave.

With all our matches being played on good wickets, we were never close to being bowled out and our top four batsmen all scored fairly heavily, supported by others when the opportunity arose. However, there were certainly occasions, particularly when chasing a target, when we needed to be more positive with our attacking shots and more aggressive with our running between the wickets.

All our bowlers performed really well at times but we often spent long periods bowling at good, positive batsmen on excellent surfaces. I suppose we needed to be more consistent as individuals and as a group but our fielding could certainly have been better at times to support the bowlers.

Many of our difficulties came as no surprise as, sadly, due to long term injuries and unavailability we were deprived of most of our powerful middle order batsmen, some of whom would have given us more variety and options with the ball together with a few decent throwing arms.

However, there were many excellent individual performances during the course of the season and it was extremely encouraging that so many players that didn’t feature during the previous season did so well. Our fifty-nine-year-old ‘youth’, Hugh Bellamy was second in our list of run scorers behind captain, Simon Hogg and Adrian Procter, who had not featured for the 1st team since 2016, was our leading wicket taker, just ahead of the ever reliable duo, Phil Stevens and Nick Virgin. It was also good to see Ali Barr, our 2nd XI vice-captain playing all season in the first team, opening the batting with such confidence.

A big thank you to our umpires and particularly to our exceptional, ever-present scorer, Mike Ablett.

Stage 1: the first 6 games, during which we were undefeated having stolen a thrilling tie from our first match of the competition against Wales.

Stage 2: the next 6 games, during which, following some indifferent form, we had a run of 3 wins and 3 defeats, to conclude the group matches and finish second to Wales.

Stage 3: the knock-out phases, during which we enjoyed a convincing away quarter-final win against Hertfordshire (Nationally ranked no.1) A narrow but deserved home semi-final win against Wales, followed by a thumping National Final victory over Lancashire at Stroud CC to conclude a very successful season.

To conclude: a whole variety of reasons contributed to an absence of consistency in selection this season, which would usually underpin successful team/squad progress. 34 different players were called on to represent the 2’s, with an average of 4 team changes each week, which indicates the depth and talent of playing resource within the Somerset Seniors. The quality and number of players available towards the end of the season presented particularly tough selection decisions, especially for the final, a situation not experienced earlier in the season. Dave Wilcox and Derry West, who had both played the majority of earlier matches, were omitted for the final. Despite understandable disappointment, I am grateful for the manner in which they accepted the decision and that both were supportive of the team throughout the final and to join the post-match celebrations.

Rick Hutchinson: batting at 7, undefeated 39 in 44 balls helping us crucially squeeze past Gloucestershire in the 44th over, in his only game for the 2’s!

Devon: being reduced to 11 for 4 wkts in the 16th over at Wembdon

Hugh Brooker: his maiden seniors’ century, 101no v Devon at Exmouth in his 2nd match

Steve Sheppard: his selection for England O70’s. 2’s leading wicket taker with 17 wickets from only 9. His match-winning all round performance of 5-10 in the quarter-final defeat of Hertfordshire, following his crucial earlier knock of 22 runs off 20 balls. A truly skilled performer and remarkable athlete.

Andy Ashfold: scoring 409 runs in his 6 matches, including a superb undefeated 123 in the National Final v Lancashire & sharing a match-winning opening stand of 206 in 38.2 overs, with newcomer David Noyes, who was probably disappointed he fell short of his personal milestone, falling for 87.

Sung & Unsung heroes: thanks to all the players, but thanks too must be extended to the (almost) ever present umpiring of Chris Norton (he missed 1 match) and scorer Chalkie Whyte for their valuable and unstinting support.

The first season for the 60’s 3rd xi was deemed a success despite a 6th place finish in the table. We played 10, won 4, lost 5 with 1 game abandoned. There had been reservations as to whether we could get a side out, let alone compete. Surprisingly we started with an easy victory against Buckinghamshire, 62 for Neil Johnson. An abandoned game v Wales and a comprehensive victory over Warwickshire (Harry Humphries 4 for 12) and we were top of the table!  Injuries and absences in the 1st and 2nds were beginning to impact on 3rd xi selection though. We were thrashed by Gloucestershire. Two more heavy defeats followed against Worcestershire and Oxfordshire and then disaster struck as the 2nd xi needed 6 of our players for the away game at Cornwall and we had no choice than to concede our game v Warwickshire. We were penalised 20 points, and bottom of the table Warwickshire were gifted 20 points. A further heavy defeat to Wales left us near the bottom of the table. Four games to go and we won 2, lost to Gloucestershire and the Worcestershire game was cancelled because of the heat. The two victories were against Buckinghamshire (Andy Ashfold 115*) and Oxfordshire (David Noyes 103*, Andrew Hannam 3 for 17 – both on debut). Gloucestershire racked up 298 for 3 at Keynsham, but despite half centuries for Rick Hutchinson and Roger Gale in the reply, it was 57 runs too many for us.

So a final position in the table of 6th, which possibly could have been 3rd if not for the conceded game. We gained an instant semi-final place against Middlesex at Southgate CC after Suffolk conceded. Middlesex racked up a ‘gettable’ 247 for 4 but despite losing wickets at regular intervals, Neil Johnson never gave up, scoring 96 as we lost by just 18 runs. Ironically Middlesex then lost the Vase final to Buckinghamshire, who we had beaten twice!

Neil Johnson (228) was the leading run scorer followed by Rick Hutchinson (197). Harry Humphries (10) and Steve Pursey (9) were the leading wicket takers. Thirty-five different players represented the 3rd xi during the season, everyone playing a vital role in helping our first season become a success.

With so many new players joining Somerset Seniors this year, 2023 looks very promising for the 3rd xi.

Big thanks to our regular umpire Steve Dove and our scorer Brian Eaves.